Last week on Thursday, instances 3rd, the Oban Web+Pro package repository experienced a database outage. As a result of this outage, our customers experienced 4 hours and 22 minutes of downtime where they were unable to fetch oban_pro or oban_web packages. We’d like to apologize to our customers for the impact on their daily operations—that’s a large chunk of the workday.

Allow us explain what caused the outage, what happened during the outage, and what we are doing to help prevent events like this in the future. 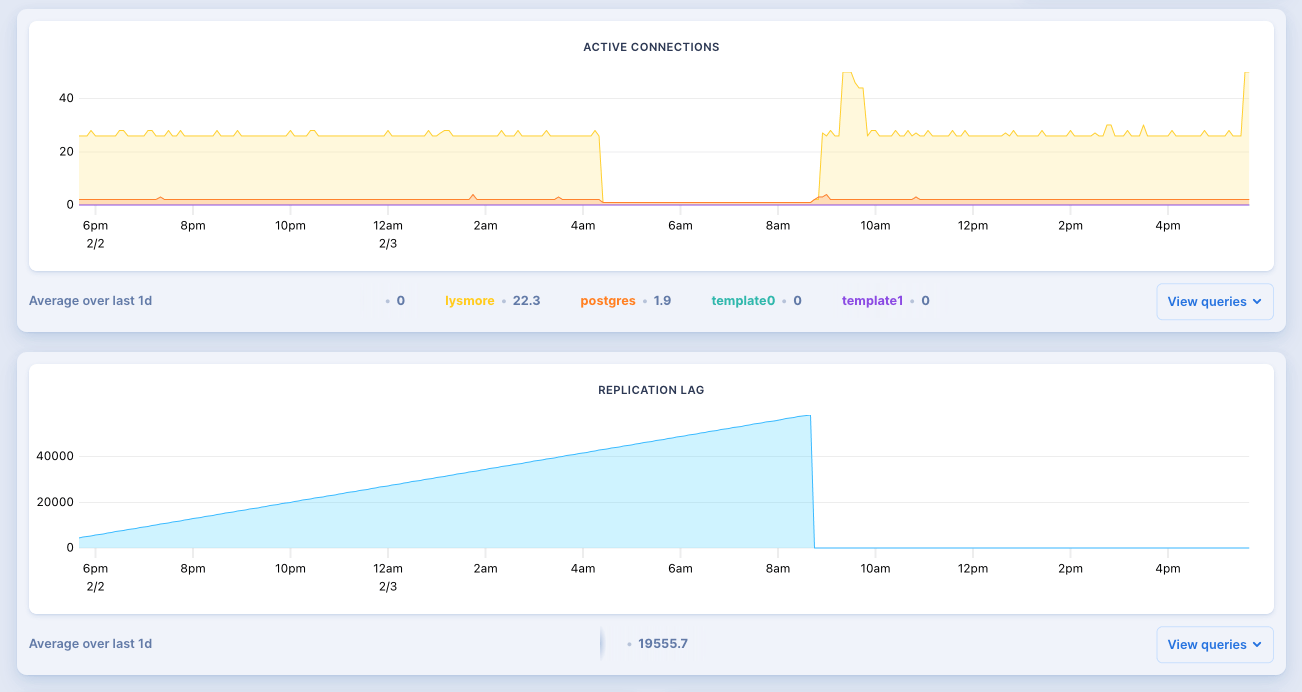 All times are in CST to match the metrics dashboard. Sorry, we prefer UTC too.

Our Postgres instances crashed around 4:34 CST and all database backed requests, e.g. repository license checks, started erroring. Shortly thereafter, the application itself crashed, and requests for static pages started failing as well. At 7:00 we discovered that the application was down, through multiple channels including Twitter, Slack, and various emails, we checked the metrics dashboard and immediately saw that the database crashed. We attempted to reboot the database to no avail.

Around 8:00 CST we began the process of swapping from our primary database from 10GB volume up to 40GB. However, without any active servers running it wasn’t clear which volume should be dropped to force a failover. Horrifically, we chose the wrong one:

Fortunately, at that point, we had manual intervention from Fly staff. They restored the dropped volume, recovered disk space, and finished swapping over to newly provisioned volumes.

After that the database instances came back online, we were able to restart the app servers, and at 8:55 CST everything was running normally.

Our database generated excess WAL (write ahead logs) that consumed all of the available space on our primary and secondary volumes. The volumes were 10GB each, while the database itself is only 250MB on disk and the metrics dashboard showed 3.7GB total VM usage: 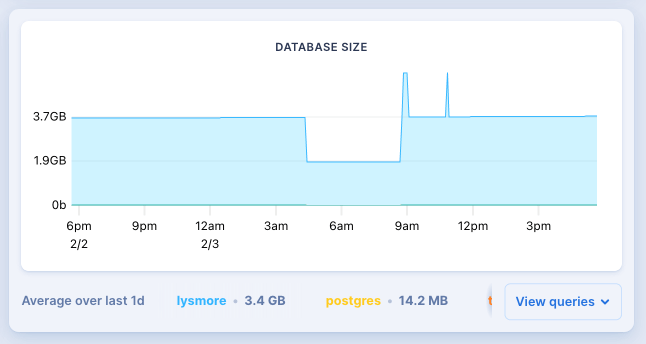 Despite the small database size, due to a high write workload, the WAL grew to 8GB. Once the database volume was out of space both postgres instances crashed and were unable to reboot. Our app’s workload hasn’t changed in recent months, so we’re still investigating why the WAL suddenly grew so much.

While much of our application is static, including Pro and Web package hosting, any hex calls to the repository require a database call to verify an active license. That made the database a single point of failure.

People rely on our infrastructure for their daily operations. Serving packages is critical to our customers and we take it seriously. Despite considerable inconvenience, everyone was amazingly understanding and supportive.

Many thanks for trusting Oban and partnering with us.

In the event the sky-is-falling-again, the biggest inconvenience you’ll have is a few moments of downtime while we cut over to backup hosting. Follow us on Twitter and we’ll update you as an incidence unfolds.

If Twitter isn’t your bag, you can always email us instead.